One of the biggest challenges of traditional glass bottle and cork stopper packaging is its inconvenience; it requires a tool to open a cork-closed bottle, glass is heavy to haul around to a beach, picnic, or on a hike, and typically there are four to six glass servings, depending on the amount poured. When it is just you, or the two of you, that means left-over wine typically, especially if the occasion is casual and moderation expected.

Half bottles (375 ml) were always promoted as a solution to making the serving size more convenient. But they still take a corkscrew to open, and they again were glass. As 187-ml plastic (PET) bottles closed with screw caps have become more popular and widespread, those two issues have been mostly addressed. 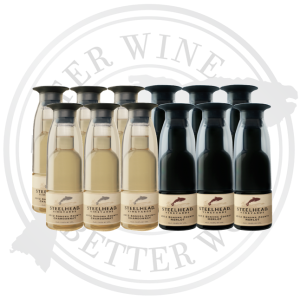 has launched an idea that Tincknell & Tincknell proposed to EnVino / Merrill Packaging during a round-table discussion in December 2009 on promoting plastic PET bottles. The concept is to provide a small glass as part of the package that the consumer purchases, making it appropriate to buy and then drink as wine would be served.

Branded as “Wine for One,” a sleek small narrow glass covers the top of the 375-ml’s neck and screw cap upside down on the bottle. This package also provides convenience and moderation while maintaining traditional form and serving factors.

Wine Bottle and Glass in One Package

“Steelhead Vineyards in Sonoma, Calif., announced it had teamed with W1NE for One to bottle wine in a new container that combines a 187 ml bottle and glass into one package. The plastic glass is attached to a screwcap bottle closure. Consumers open the bottle and then pour the wine into the glass. Steelhead Vineyards is a partnership between former professional baseball player Joe Morgan and vintner Dan Leese, who, according to a press release, want to use the new package to serve fine wine in casual settings such as a ballpark.“

The flexible wine pouch also solves those issues of convenience and fragility. But alternative packaging also addresses serving size and moderation. A 187-ml bottle is 6.3 oz. of wine, a pretty full glass. A typical glass of wine is between 4-6 oz. Drink two 187-ml servings and you’ve downed a full half bottle of wine. However, two OneGlass pouches at 4 oz. each is a bit less, allowing for some moderation while enjoying wine over an extended period.

“Riondo USA is also innovating with OneGlass, a new single-serve wine brand in a pouch. OneGlass is rolling out this month in 30 states, with national coverage slated for next year. Priced at $2.99 a 4-ounce package, OneGlass is initially available in four different varieties—Cabernet Sauvignon, Merlot, Pinot Grigio and Sangria. Riondo plans to extend the line with a Chardonnay and a chocolate wine next year.“

Paul Tincknell has over three decades in wine sales and marketing, including on- and off-premise sales, as Assistant to the Director of Sales and Marketing at Chateau Montelena, and as the Senior Marketing and Direct Sales Manager at Cuvaison Winery. His experience includes retail wine sales; on-premise beverage management; marketing, direct sales, and wine club management; information systems and office technology management; website design and content management; and strategic business planning. His interests and specializations at Tincknell & Tincknell, Wine Sales and Marketing Consultants, include strategic business planning and development; creating an effective, branded, marketing environment through the combination of graphic design and marketing strategies; and developing innovative, alternative packaging to expand the popularity and accessibility of wine.